The AI Software taking the internet by a storm – ChatGPT 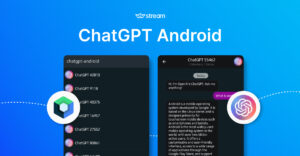 ChatGPT (Generative Pre-trained Transformer) is a chatbot launched by OpenAI, a research laboratory in California in November 2022. It is built on top of OpenAI’s GPT-3 family of large language models, and is fine-tuned with both supervised and reinforcement learning techniques.

ChatGPT was launched as a prototype on November 30, 2022, and quickly garnered attention for its detailed responses and articulate answers across many domains of knowledge. Following the release of ChatGPT, OpenAI was reportedly valued at 29 billion USD.

Since its launch, ChatGPT has become an extraordinary hit. Essentially a more elaborate chatbot, the AI program can churn out answers to the biggest and smallest questions in life, and draw up college essays, fictional stories, emails, poems and even job application letters. It does this by drawing on what it has gleaned from a staggering amount of text on the internet, with careful guidance from human experts. Ask ChatGPT a question, as millions have in recent weeks, and it will do its best to respond – unless it knows it cannot. The answers are confident and fluently written, even if they are sometimes stunningly wrong.

The AI is built on a large language model or LLM, which is fed hundreds of billions of words in the form of books, conversations and web articles, from which it builds a model, based on statistical probability, of the words and sentences that tend to follow whatever text came before. It is a bit like predictive text on a mobile phone, but scaled up massively, allowing it to produce entire responses instead of single words.

It has a remarkable ability to interact in conversational dialogue form and provide responses that can appear surprisingly human. Reinforcement Learning with Human Feedback (RLHF) is an additional layer of training that uses human feedback to help ChatGPT learn the ability to follow directions and generate responses that are satisfactory to humans.

As with every invention, ChatGPT comes with some limitations; it is specifically programmed not to provide toxic or harmful responses. So, it will avoid answering those kinds of questions. Another important limitation is that the quality of the output depends on the quality of the input. In other words, expert directions (prompts) generate better answers. Then also, ChatGPT has no handle on the truth, so even when answers are fluent and plausible, there is no guarantee they are correct.

OpenAI acknowledges these limitations and says “we plan to make regular model updates to improve in such areas. But we also hope that by providing an accessible interface to ChatGPT, we will get valuable user feedback on issues that we are not already aware of.”

You can try it on chat.openai.com