Dr. CHARITY BINKA is the Executive Director of an Accra based NGO, Women, Media and Change (WOMEC). The NGO is committed to training women and girls in media skills and ICT as well as build the capacity of journalists in gender and health reporting- www.womec.org

CHARITY is committed to the development of the media in Africa. She is particularly interested in building the skills of African journalists to report effectively on malaria. Her passion in health reporting led to the establishment of the African Media and Malaria Research Network (AMMREN), of which she is the Executive Secretary. The Network brings together journalists from ten (10) African countries who have been trained to report on malaria on the Continent. – www.ammren.org.

CHARITY worked with the Ghana Broadcasting Corporation for 18 years from 1990 to 2008, where she rose to the rank of Editor-in-Chief and Head of the Gender Desk of the Radio Division of the Corporation.

CHARITY previously worked with the African Newspapers of Nigeria Limited in Ibadan, publishers of the Nigerian Tribune and Sunday Tribune. She worked as a columnist and senior reporter for four years. She became the Acting Ogun State Correspondent, based at Abeokuta, Nigeria, before leaving for Ghana in 1986.

CHARITY joined the Ghana Institute of Management and Public Administration (GIMPA) in November 2008 where she now lectures. Between 2009 and 2012, she served as the Manager of the GIMPA Gender Development and Research Centre.. During her tenure Charity coordinated the process of developing a Gender Policy and Action Plan for GIMPA and played a lead role in organizing orientation workshops for GIMPA Council and staff. As Gender Centre Manager, Charity worked on over US$300,000 GIMPA/ African Development Bank/ former Ministry of Women and Children’ Affairs, Gender Responsive Skills and Community Development Project.

CHARITY was the Ghana Team Coordinator of a British Council/DFID funded project, the Virtual Newsroom Project from 2001 to 2004. The Project linked 80 female journalists from eight African Countries to produce a monthly web-based Monthly Newspaper called the “Africawoman”.

CHARITY was also the President of the Society for Women and AIDS in Africa (SWAA), Ghana Chapter from 2002 to 2004. During her tenure as President, SWAA Ghana successfully implemented a $150,000 DANIDA funded project on the Promotion of Female Condom use in five regions of Ghana.

She serves on several local and international boards, including to the African Women’s Development and Communication Network (FEMNET), Nairobi, Kenya (West Africa Representative and Secretary to the Board); International Needs, Ghana (Member); the International Institute for ICT Journalism (Member), Accra Ghana and a member of the Institutional Review Board (IRB) of the Dodowa Health Research Centre.

CHARITY also served as the lead gender expert for the GIMPA/CIDA Food Security and Environment Facility Project of CDN$ 14.3 million that targeted the three regions of Northern Ghana.

CHARITY is a Chevening Fellow (1998), UK and a Fellow of the Women Leaders of the World Programme of the Leavey Business School of the Santa Clara University, California, USA (2008)

CHARITY is the Managing Editor of Eyes on Malaria, the flagship magazine of the AMMREN, which focuses on initiatives across Africa to kick out the disease from the Continent – www.eyesonmalaria

She published a Newsletter, “The Female Parliamentarian”, a newsletter dedicated to celebrating women parliamentarians in Ghana.

CHARITY holds a PhD degree in Population and Health from the University of Cape Coast. Her research focused on “Barriers to Cervical Cancer Screening and Treatment in Rural Ghana.” 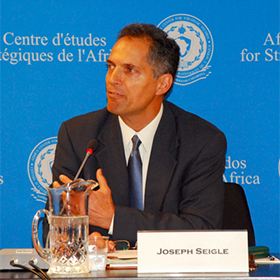 Dr. Joseph Siegle is the Director of Research at the Africa Center for Strategic Studies. Dr. Siegle has served in… 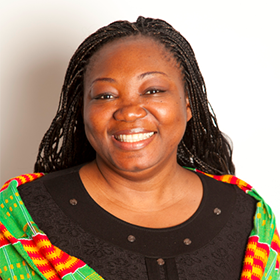 Nnenna works to develop cutting-edge collaborations in Africa. Her work has a particular focus on the Alliance for Affordable Internet… 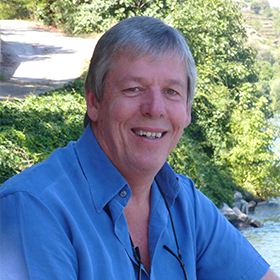 Long experience of surviving in a challenging environment. Two small companies, dedicated staff, working on the principle that where there…