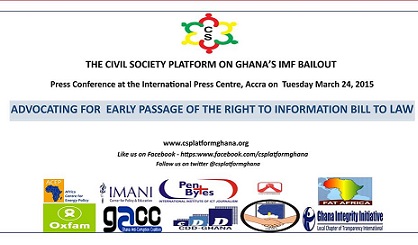 The Civil Society Platform on Ghana’s IMF Bailout made up of CSOs such as; Ghana Integrity Initiative, Penplusbytes, Imani Center for Policy and Education, SEND Ghana, Oxfam ,Institute of Chartered Accountants, Ghana, Centre for Democratic Development, Financial Accountability & Transparency-Africa, African Centre for Energy Policy, Ghana Anti-Corruption Coalition, African Centre for Parliamentary Affairs, Occupy Ghana among others, wish to congratulate the Government of Ghana on the successful completion of negotiations with the IMF for a Fund programme.

As we have consistently echoed, the final agreement should contain measures that would ensure fiscal discipline, accountability and transparency, link stabilization to transformation, as well as protect strategic pro-poor and pro-development spending. These, we believe would guarantee better allocation of public resources, efficient and effective service delivery as well as enhance our country’s Public Financial Management system so that the current bailout agreement becomes the very last going forward.

Fortunately, the Platform has had fruitful engagements with government and the IMF team during the negotiations stages of the agreement which is quite novel relative to previous programmes with the IMF. We believe this is essential to allow for the needed citizens’ buy in so as to deal with the apprehension and distrust associated with IMF programmes often due to general lack of openness and absence of citizens’ participation in such processes.

We therefore, encourage the citizenry to support government to effectively implement and monitor the Fund programme after the deal is signed next month.

Today, our concern and the reason why we have called this Press Conference is the non-passage of the Right to Information legislation. As you would expect, the concept of access to information is essentially people’s right to know what government is doing with the tax payers’ money and what government plans to do in their name and on their behalf.

However, a major hurdle faced by many in Ghana including; those in academia, think-thanks, civil society, as well as the media is difficulty in accessing rather basic public information as enshrined under article 21 (1) (f) of our country’s 1992 constitution which guarantees every citizen of Ghana, “the right to information subject to such qualifications and laws as are necessary in a democratic society’’.

Yet, most public officials and state institutions determine when and at what time to provide information with some declining such requests altogether even though in most cases information required may not have security implications for the state and are readily accessible information in other jurisdictions.

This current situation, we believe needs urgent redress if we are to hold our public office holders accountable for the management of public resources and ensure judicious use of public funds.

Consequently, we believe strongly that without timely and readily accessible information, the citizens of Ghana cannot effectively track public expenditure and resource flows through the various strata of government in order to determine how much of originally allocated public resources reach each intended end and whether or not such funds are used in the most economical, effective and efficient manner.

In this regard, a major tool that would incentivize citizens’ quest for accountability and transparency from our governance structures and institutions at the national level through to the district level is an effective Law on the Right to Information/Freedom of Information.

We affirm that the need for a Right to Information/Freedom of Information Law now, has become even more imperative with the signing of the eventual IMF bailout programme expected next month to kick start implementation of the IMF programme.

It is our conviction that citizen-based monitoring and evaluation of public policies and programmes as well as provision of feedback and suggestions under this IMF programme, are sure ways to assess the government’s execution of social and economic programmes so as to check profligacy in the system and protect the public purse.

To this end, civil society, the media and other non-state actors should be able to independently verify whether or not officially provided statistics are what pertains on the ground; we should have the information to be able to go beyond the figures and analyze the state of affairs for ourselves.

This call by civil society aligns with our President’s commitment to ensure that as a country we do not again in our history revert to the IMF in the near future for another Fund programme for whatever reasons. We should be able to do things right and learn from past errors.

Passage of the Right to Information Bill to Law

The right to access information has gained wide recognition as a central hallmark of a functional democracy in our continent and elsewhere. 6 West African countries including Nigeria out of 13 countries in Africa have a Law on Freedom of Information.

The CS Platform recognizes that a lot of work has gone on over the years on the part of the Attorney-General’s Department, Parliament’s Select Committee on Constitutional, Legal and Parliamentary Affairs and the Coalition on the Right to Information, among others to have the RTI bill in Parliament awaiting its second reading and possible passage before Parliament goes on recess this month.

Given the level of progress that has been made on the Bill, our expectation was that the Bill would have been passed by now. Yet, as at today, the Bill is yet to be tabled for second reading to enable the commencement of discussions/debate on the Bill on the floor of Parliament.

This current state of affairs should be of grave concern to all Ghanaians and civil society cannot fathom why there are delays in having the second reading of the Bill although Parliament’s Select Committee on Constitutional, Legal and Parliamentary Affairs has concluded its deliberations and submitted its report to the august House.

The RTI Bill when passed into law will among other things provide a hierarchy of administrative avenues to ensure citizens get access to information and thus make the resort to the law court a last option.

The Civil Society Platform thus calls on our Parliamentarians to put the interest of the nation first and not betray the trust of their constituents by showing a lot more commitment to have the second reading and subsequently pass the RTI bill into law so that as a country we would not just have a law, but a legislation that opens up the door for people to have real access to information before Parliament goes on recess in March 2015.

We also call on government to be open and engaging in the implementation of the eventual programme with the IMF. As citizens of this country we will feel let down if government fails to grant the populace the critical tool for assessing the use of public resources which is the Law on Right to Information for us to effectively monitor the implementation of the bailout as was the case in the past.

Many thanks for your audience. 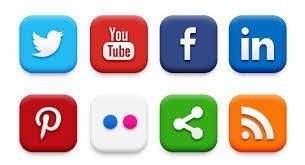 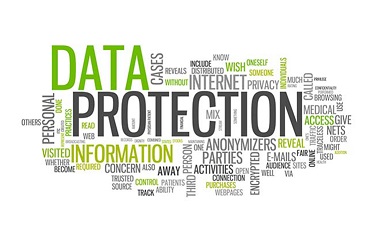 Ghana: New law requires data holders to register
Ghana’s Data Protection Act, 2012 (ACT 843), a legislation enacted by the Parliament of the…
PENPLUSBYTES AND FAT AFRICA CITIZENS' BUDGET ROADSHOW KICK OFF
FAT-Africa is a Civil Society Organization and a Think Tank that advocates and promotes Good…
From Our Youtube Channel
Tweets by @penplusbytes
Copyright 2018 - Penplusbytes - All Rights Reserved