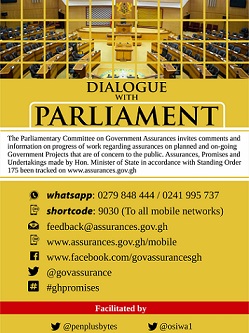 DID YOU KNOW YOU CAN TALK TO PARLIAMENT OF GHANA USING NEW DIGITAL TOOLS?

In order to provide a cost effective and efficient means for citizens to connect with Parliament of Ghana, Penplusbytes, working with Parliament’s Committee on Government Assurances (CGA), is undertaking the “Connecting Citizens to Parliament” project with financial and technical support from the Open Society Initiative for West Africa (OSIWA). The project is anchored on developed and well-tested interactive digital platforms that enhance interaction between the CGA, Civil Society Organisations (CSOs), citizens and other stakeholder to better track and monitor assurances, promises and undertakings made by government on the floor of Parliament.

The Internet and the emergence of mobile technology have significantly boosted citizens’ participation in the legislative process therefore providing credible avenues to broadening the consultative base to include the input and contributions of all in the governance process.

All over the world, parliaments, governments, civil society organizations, and even individual parliamentarians, are increasingly identifying the essence in finding and promoting mechanisms (tools) – often open source, which allows them to interact more with citizens; enabling them to markup legislation or share ideas on specific issues of interest to them.

This project now has available various digital platforms of engagement for utilization by citizens. A visit to the GovAssurances web-platform will reveal to users, the project’s key elements which include the composition of the committee, showing what assurance(s) have been made in which sector of the economy, directing citizens to various projects of their interests which can then be tracked by them. Followers of the social media platforms – Government Assurances on Facebook and @govassurance on Twitter – receive, on a regular basis, information on details of various projects in addition to news about the CGA and its monitoring activities across the country. It also has an SMS short-code 9030 to which citizens can conveniently send and receive information or make enquiries on the status(es) of ongoing projects (Assurances) in their communities. Dedicated Whatsapp platforms via 0279848444 and 0241995737 have been created for citizens to interact with the committee on the status of various projects, with an opportunity to receive feedback on their inputs, queries and contributions. Citizens can as well download the Ghana Government Assurances mobile app on Google play store to give greater meaning to what effective monitoring means once they can, on-the-go, access details on promised projects and the various allocations made to it.

Citizens’ inputs and feedback is an integral part of the CGA’s work and the governance process at large. Join in now and talk to Parliament today! Follow, download and utilise the various digital tools designed to increase participation and to close feedback loops for effective dialogue to ensuring accountability from those entrusted with public resources.

Tech4Governance Ghana Competition Announcement
On May 30th 2015, Penplusbytes and Making All Voices Count will host a pitching competition… 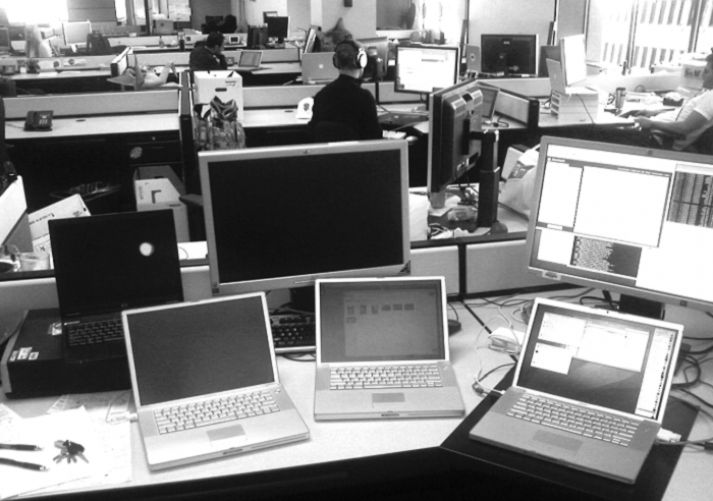